Spanish and English are actually quite similar. Both languages have European roots, so they originated from the same place. With our intertwined cultures, they are constantly sharing vocabulary–even now! (you can click the image below if you want to be able to zoom in!)

What languages are closest to English? They will be on the same branch. The size of the leaf cluster represents how many speakers there are today.

What languages are closest to Spanish? If you learn Spanish, learning these languages becomes EXPONENTIALLY easier!!!

A cognate is a word that is the same or similar in two languages. For example, the word animal is the same in English and Spanish. The word automático is similar to an English word, and I’m sure you can guess what it is. Take a look at this

What words on that list surprised you? What patterns did you notice with some of the translations? (-tion words, -ic words, -ary words)

In fact, some English words that we often use are directly borrowed from Spanish.

Some of these come from indigenous (native) languages from South America before the Spanish conquistadors came in. Which of the words on this list do you find yourself using a lot?

Spanish has adopted many English words and tweeked the spelling so that they end up being pronounced the same or almost the same. They call these anglocismos. For example, baseball is an American sport. In Spanish, they would pronounce that word the same but spell it beisbol. Bacon becomes béicon.

In this picture are words that you’ll hear Spanish-speakers use:

Because so many technological advances are being made in the English-speaking world, Spanish-speaking countries simply adopt the words linked to these new technologies. For example, the word tablet and wi-fi are used in countries like Mexico, Spain, Peru, etc.!

Here are some more new words that Spanish-speakers recently adopted from English.

If someone wants to send a text message, they say textear = to text. Escanear = to scan. Forwardear = to forward. Eskypear = to Skype. Tuíter = Twitter and tuitear = to tweet. Una selfi = selfie. 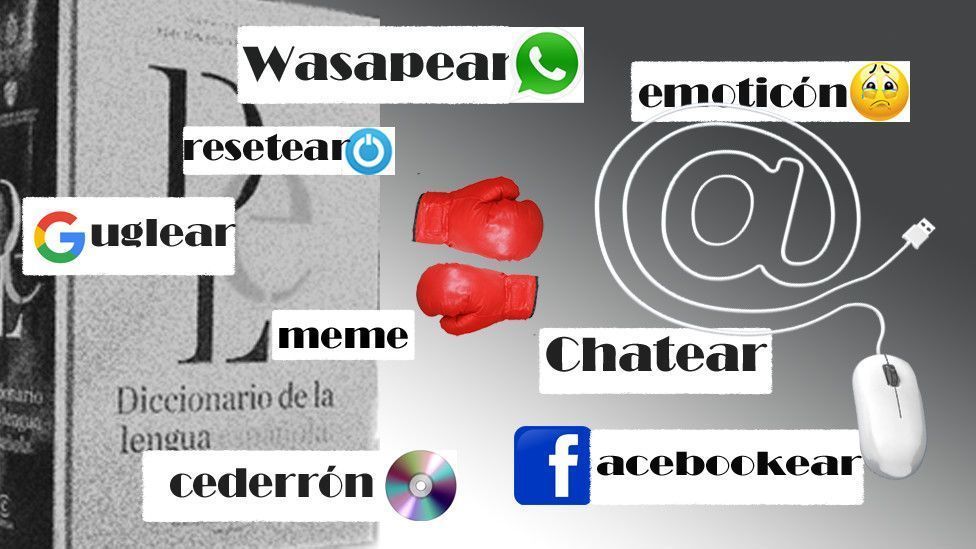